Since leaving Barcelona, Pep Guardiola has signed players from the Camp Nou for Bayern Munich and his current club, Manchester City.

On November 26th, Mundo Deportivo reported the Blaugrana are irritated because the Premier League winners’ manager is still after their players and also their targets, which includes Ajax’s Frenkie de Jong.

Barcelona’s 15-year-old youngster Ilaix Moriba is one of them and he’s on the radar of the Etihad outfit.

In October, we carried a report from Sport, who claimed the English club have made a ‘very attractive’ offer to the teenager, both in terms of finances and the sporting project.

Today’s edition of Mundo Deportivo once again mentions City’s interest in the young midfielder, who is already playing in a group who are three years older than him.

The La Liga winners’ ‘priority’ is to offer him his first professional contract when he turns 16 (on January 19th) in order to avoid losing him to Guardiola’s side or any other club.

Worried about City snatching the player, they’ve already held meetings with his entourage to try and prevent it. 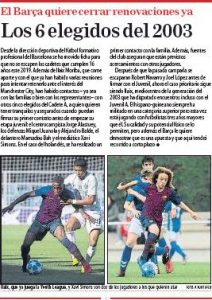 Their aim is tie down six youngsters’ futures by offering them new contracts and Ilaix is one of them.