There was a hurry for Benfica to renew Florentino’s contract since they thought some clubs could sign him this summer, especially Manchester City. And A Bola explains this chase today.

The newspaper writes that Pep Guardiola’s side were the ones showing the biggest interest in signing Florentino. Back in April, they made clear they could pay €35m for the player. 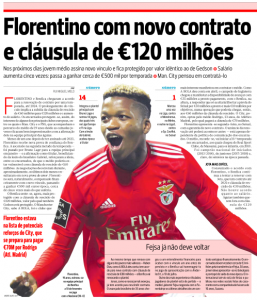 But Benfica rejected that offer. They demanded €50m and another €10m in bonuses, so the operation would get to the €60m release clause he had at the time.

A Bola says that’s when Manchester City chose to go for Rodrigo instead, looking at a €70m deal. So it was a matter of picking one of the two.

Now in a few years we should look at this story and see if Rodrigo or Florentino was the better choice.