Real Betis are pushing to sign Claudio Bravo from Manchester City once his contract at the Etihad comes to an end.

That’s according to ABC Sevilla, who say the Spanish club are keen to make his signing this summer.

The 37-year-old is set to leave Manchester City once they have completed their Champions League campaign and Betis’ management, namely Antonio Cordon and manager Manuel Pellegrini, see him as ‘good recruitment’.

Their idea is that Bravo will play the role of ‘experienced goalkeeper’ who can be an immediate upgrade in goal but also add personality to the dressing room.

Negotiations between his agent and the club are already underway and ‘progressing well’, albeit they are not yet complete.

The two parties are still talking, but there is ‘optimism’ that an agreement on a one or two year deal will be reached at some point.

His availability, though, depends on when Manchester City finish their campaign. 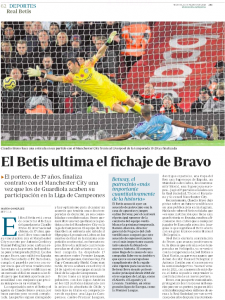 Pep Guardiola’s side are still competing in the Champions League, with a semi-final clash against Lyon coming on Saturday.

Bravo is a part of their squad so needs to finish that campaign first before he can seal a move elsewhere.

There is clear optimism from Betis it will happen, however, with the decision then to be made on who is his understudy next season.