As publicly revealed earlier this year, Portuguese side Benfica have only 50% of Ederson’s economic rights. The share was agreed back in 2015 when they signed the goalkeeper from Rio Ave, who kept the other half.

With all the rumours saying Manchester United, and especially Manchester City, would be keen on signing the player, Benfica would like to have the entire percentage to obviously make much more money in case of a transfer.

What Correio da Manhã is reporting today sounds like a joke, but it’s taken very seriously. Benfica would have offered €5m to get the other 50% share of Ederson.

The 23-year-old has a €60m release clause, and the expectation, albeit over the top in a summer which may see David De Gea move, in Portugal is that he can be the most expensive goalkeeper ever. It would be no surprise if a club like Manchester City ended up offering €30m, or even more.

So offering €5m for half of his rights sounds like an insult for Rio Ave, and that’s why they have obviously turned it down. Rio Ave hope they can make a historic profit with this sale, and they’re no fools to take €5m now as it could be much more in the summer instead. 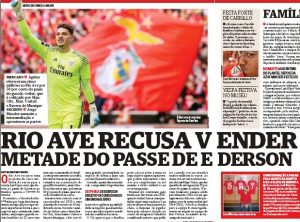 Agent Jorge Mendes, who has been responsible for Ederson since taking him from Brazil, is said to be handling the deal and will offer Rio Ave a few Benfica players in exchange for the goalkeeper’s percentage.

What we take from this story is that the issue is bad news for Manchester City, the club who have easily been linked the most. While Benfica don’t own 100% of the player, they will keep pushing for the maximum price, which will the €60m release clause, so they can make €30m.

In case the Eagles succeed in landing a bigger share, then it’s plausible they will be more flexible when negotiating. Taking €40m and above wouldn’t be a bad deal, depending on how much they will pay for the other half.

So if the English clubs want a discount, they better hope for some Mendes magic to be done.