‘Final negotiations for Semedo’ reads a headline in Monday’s edition of Sport.

The Barcelona player is said to have accepted he’s leaving the Camp Nou, and is now favourable to the idea given he’ll receive an increased salary and more prominence elsewhere.

Nelson Semedo’s price has been set at €40m, and it’s stated Manchester City are now the ‘best placed’ club to sign him. He prefers a move to the Premier League club over other options, such as Inter Milan and Juventus.

Manchester City want to use Joao Cancelo in a deal, yet it’s said Barcelona are against that. The City man has a relatively high salary, and a cheaper option is wanted to replace Semedo.

Barcelona therefore want to hold talks with Pep Guardiola’s side in the coming days, so they can find a way to close the deal. 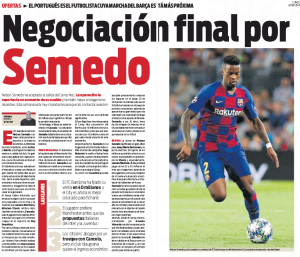 It’s important to point out that a week ago, Marca rubbished all of this, and said it was Jorge Mendes trying to build a deal rather than Manchester City. Semedo was being offered to them, but they hadn’t jumped at the chance.

There’s no way City would sign him without having sold Cancelo first, so despite the wishful thinking from the Catalan media, it looks like this one is a long way from being close.