By the start of the week, Sporting manager Ruben Amorim revealed in a press conference that João Virgínia would have the chance to start in the Champions League game against Ajax.

The goalkeeper is loaned by Everton until the end of the season, and since he’s only been playing cup matches, the Lisbon side wanted to give him a big stage so he could show his potential and perhaps convince them of triggering the buying option.

It turns out things didn’t go well for Sporting in that game, with the Dutch side winning 4-2, even though the result was never Virgínia’s fault.

Now according to a story from Correio da Manhã, Ruben Amorim will keep giving the goalkeeper new chances until he finally decides whether the Lions should buy him for €3.5m or not.

Correio da Manhã writes that despite conceding four goals, Virgínia ‘made several saves of high difficulty’. Now besides ‘passing this test’, he’ll be challenged a few other times. 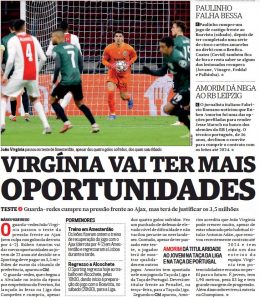 The newspaper learned that Ruben Amorim believes the player can ‘grow a lot’, despite mostly staying on the bench this season, and ‘fits the profile for the future’.

He’s now set to start in a cup game once again next week, and the more he plays, the sooner the Lions take a decision on buying him from Everton.