Georginio Wijnaldum’s contract at Liverpool runs down at the end of the season and there’s still no clarity over his long-term future.

Earlier this week, the 30-year-old told Sky Sports there is “no update” on his contract situation with the Reds.

The midfielder was linked to Barcelona last summer and multiple reports have stated they maintain an interest in taking him on a free transfer after this campaign.

Mundo Deportivo provides a background into what happened last summer and the La Liga side’s plans for the Liverpool player.

It’s claimed the Netherlands international ‘did not even negotiate’ with the Catalan club in the summer transfer window because Barca’s priorities were to sign Manchester City’s Eric García and Lyon’s Memphis Depay.

Mundo has a report on the trio today, with a title that reads ‘Koeman wants Eric, Wijnaldum and Depay’.

The former Everton manager knows his compatriot from his time with the national team.

Wijnaldum has played at the highest level, has the experience of playing ‘total Dutch football’, and has the qualities and legs to be a vital member of the midfield. 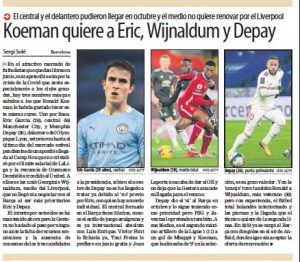 Barcelona have received encouragement in their chase for the Dutchman as Mundo adds Jürgen Klopp’s man ‘does not want to renew’ his contract with Liverpool.

This will be well received at the Camp Nou, as both Koeman and Barcelona want to acquire Wijnaldum’s services in the summer.