Last month, Burnley cut ties their long-term manager, Sean Dyche, and Mike Jackson was appointed as their caretaker manager until the end of the season.

Het Laatste Nieuws on Friday state the Clarets are ‘aiming their full attention’ towards Vincent Kompany to be their next permanent manager.

The Anderlecht boss ‘fits the profile of the modern manager’ and is ‘at the top of the wish-list’ of Burnley owner Alan Pace. He has narrowed down the candidates over the last two weeks and the former Manchester City star’s name is ‘more emphatically in picture’.

Kompany is the ‘first-choice’ for Pace, provided the English club secure a place in the top division next season. They are 17th in the table, level on points with 18th placed Leeds United, with one game left to go this season.

The 36-year-old ‘fits the bill’ for Burnley. For him, a return to England would fit well with his family’s future plans, given it’s close to Manchester.

HLN point out the work Kompany has to put in to rebuild Anderlecht’s squad and they weigh it against the job he would have to do at Turf Moor. The only advantage with the latter is they would have better financial resources than the Belgian club. 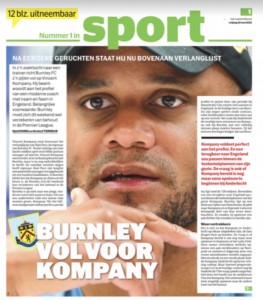 His contract at Anderlecht lasts until 2024. Burnley will have ‘have to put a bag of money on the table’ to take the former defender away from the Jupiler Pro League side.

HLN end the report by stating: ‘Perhaps the time is therefore right, for both Anderlecht and Kompany, to listen to offers from other clubs. Saying goodbye in beauty now – albeit without a trophy – is more elegant than pushing a club icon out the door halfway through next season.’