West Ham beat Southampton at the weekend to give Manuel Pellegrini a little breathing space at the club.

That doesn’t mean all rumours around the managerial position have gone, and the Chilean needs to string a good run of results together to set his job prospects back in concrete.

Cesare Prandelli has been linked with the job this week, and Tuesday’s edition of La Nazione has what they present as the current situation.

The Italian newspaper states Prandelli could possibly end up in English football soon. West Ham have ‘in recent hours’ sent a proposal to the manager, best known for his stints with Fiorentina and Italy.

Prandelli, who is 62 years of age, is said to be ‘tempted’ by the prospect of taking over at the Hammers, but a return to Fiorentina is another possibility. 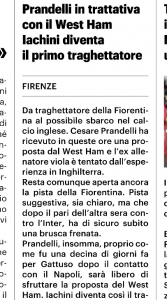 A lot could depend on who is first to get the boot out of Pellegrini and Fiorentina coach Vincenzo Montella.