A week ago, we covered claims from France Football about Real Madrid and Sadio Mane.

The French magazine explained Zinedine Zidane had been keen last summer, but the idea was then shelved by Madrid when the manager left.

It didn’t take long after his return for the claims to surface again, with France Football explaining Zidane’s serious interest in the Liverpool player remains and there could be a transfer approach this summer.

El Confidencial, who have been good on Madrid transfers over the past five years or so, then backed the report up. 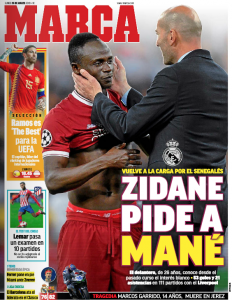 They explained that whilst Florentino Perez still has dreams of signing Kylian Mbappe and/or Neymar, Zidane wants the club’s president to be more realistic.

That’s where Eden Hazard and Mane come in, with it being made clear Zidane would be especially delighted with the Liverpool player.

Now Mane is on the front page of Monday’s Marca.

Inside there’s a headline saying Zidane ‘insists’ on the signing. 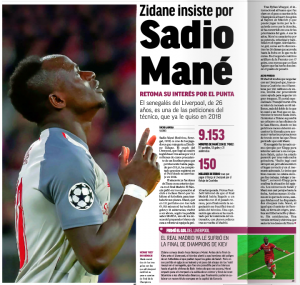 Interest from 2018 is covered and it’s even stated the manager telephoned the Liverpool player.

Marca then say: ‘An operation that has now been reactivated by the insistence of the coach, who has full power after his return to Madrid.’

The Spanish newspaper believe Liverpool would use the Coutinho fee as a reference.