When it comes to disappointing signings for Chelsea over the years, it’s fair to say Kepa Arrizabalaga is up there.

The Spanish goalkeeper arrived from Athletic Bilbao for the hefty fee of his £72m release clause, but the performances that followed never lived up to the price tag.

So much so that Frank Lampard brought in Edouard Mendy last summer to provide competition for him, which saw the Senegal international supplant his coworker for the role almost immediately.

That has left Kepa sat on the sidelines for the best part of the campaign, leading many to believe he could be sent elsewhere in the coming months.

However, in order to do that, you would need to find a manager that believes in him, as well as a club willing to provide funds to make a deal happen.

Well, Chelsea can count on one of those things, and that’s the former.

According to Gazzetta dello Sport, Maurizio Sarri is already having a look at the current AS Roma squad to decide who he’d like to keep should he take over from Paulo Fonseca, and the goalkeeper position remains problematic. 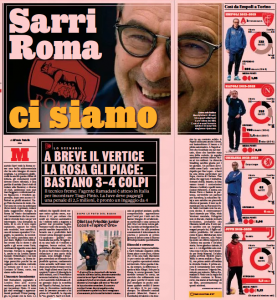 It’s stated a new goalkeeper is ‘needed like air’, and the former Chelsea manager has a ‘special esteem’ for Kepa.

Despite this, however, there are currently ‘no talks’ regarding a move, although ‘tomorrow, who knows?’

This also backed up by Calciomercato, who repeat similar things by saying the manager likes Kepa for the goalkeeper role at the Serie A side.

Certainly one to keep an eye on, especially if there is further confirmation of the Italian taking over in Rome.