Benfica do not intend to bring Manchester United midfielder Nemanja Matic back to Lisbon this summer, according to local reports today.

Newspaper Correio da Manhã says the Eagles’ new manager Roger Schmidt has ‘rejected’ the chance of signing the 33-year-old due to his age.

Matic’s comeback was a suggestion made by club director Lourenço Pereira Coelho, who’d seen the idea with ‘with good eyes’, and also a move for Angel Di Maria.

The duo were considered to be ‘appetising’ targets, still with potential to play at a high level, and with ‘advantageous’ situations in the transfer market. They would also be signings to please the fans, who always liked both players. 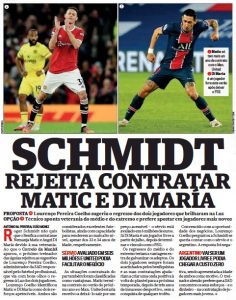 Regarding Matic, who has one year left on his contract with Manchester United, it’s said the Red Devils would let him leave for an ‘accessible price’, with Correio da Manhã pointing out he’s valued at €6m.

However, when contacted by Coelho, Schmidt turned down both signings because of their age, and told Benfica to ‘concentrate’ on signing younger players.