With Joao Cancelo’s exit from Turin almost a certainty, Juventus need a new right-back, and, much like Manchester United, they’re being linked with quite a few.

On Thursday, we got a brand new Aaron Wan-Bissaka link, stating the Serie A champions liked what the Crystal Palace youngster had to offer, but the price would be an issue.

Sporadically, over the past weeks, we’ve also been blessed with a few Kieran Trippier stories, as the 28-year-old could end up leaving Tottenham this summer.

Napoli have been the most prominent Italian side linked with the England international, but following their purchase of Giovanni Di Lorenzo from Empoli, things calmed down a bit. 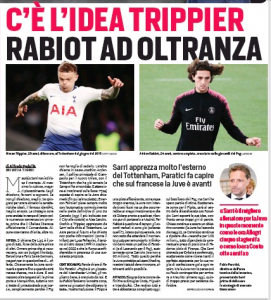 That’s why the Juventus stories have picked up some pace, with Il Bianconero on June 13th reporting the Serie A side were ‘ready to get serious’ to buy the defender after Trippier had placed Juventus at the ‘top of his preferences’.

Corriere dello Sport provide an update on Friday explaining the Tottenham man is ‘really appreciated’ by Maurizio Sarri, who got all of last season to see him up close during his time at Chelsea.

Elseid Hysaj is also on Juventus’ list, as the Albanian failed to fully convince Carlo Ancelotti last season, which led to the player’s agent making it clear they wanted to leave Napoli in the summer if they could.

That’s why the Trippier to Naples stories haven’t fully disappeared, but with Juventus now also after him, things could get a bit more exciting for Tottenham, who might cash in if the right offer comes in.