Earlier on Friday, we covered a brief story from Sky Italia claiming that Antonio Conte was ‘not convinced’ about the Tottenham job.

This came as a bit of a surprise, since other reports suggested he was doing ‘in-depth’ analyses of the squad in preparation for the role, but it appears to be that exact research that has caused him to step on the brakes.

Gazzetta dello Sport have a much more detailed version of what’s gone on behind the scenes, explaining just why the former Chelsea manager has his doubts.

The Premier League and the club’s infrastructures aren’t the problem, far from it.

Conte loves the English league and there can be no complaints about the amount of money Spurs have pumped into their facilities, but as Gazzetta explain, ‘the problem, if we can talk about a problem, is the rest’.

There are three main concerns, and those are ‘the football dimension of the club, the market and Harry Kane’s desire to leave’, with Tottenham described as ‘a magnificent unfinished’. 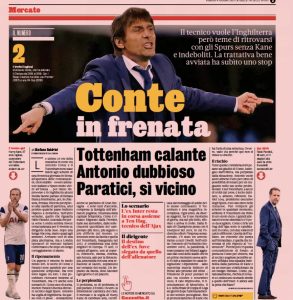 That’s why ‘all these considerations weigh on the opinions of Conte’, who, despite being ‘flattered’ by the offer, is also ‘perplexed by the situation’.

The manager reportedly wants a ‘one percent fighting chance’ of securing a title, but without a trophy since 2008, it is ‘legitimate to doubt’ Tottenham are the club to do that.

With Spurs now in a ‘dead end’ when it comes to choosing their next manager, only two realistic appointments are left: Conte and Erik ten Hag.

All in all, with all those worries and a proud manager wants to win, ‘is it worth the risk?’