On June 1st, Everton confirmed Carlo Ancelotti has left the club to take the managerial job at Real Madrid.

Earlier that day, we covered claims made by AS the Toffees have been ‘offered’ Nuno Espírito Santo.

According to AS, the Portuguese coach could soon return to management as he has received offers from the Merseyside club and Crystal Palace. The Eagles are also without a manager after Roy Hodgson stepped down at the end of last season. 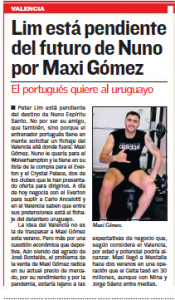 Valencia are aware of this because among Nuno’s ambitions is to sign Maxi Gómez for his new club.

The former La Liga manager tried to sign the Uruguayan for Wolves, but that didn’t yield any result. Nuno now wants to take the forward wherever he goes.

Los Ches don’t have a plan to sell Gómez, but their financial situation could see them make him available in the market.

Therefore, Peter Lim and Valencia are keeping a close eye on where Nuno could end up next season.