According to Sport, ‘it is public knowledge’ that Ronald Koeman asked the Catalan club’s technical secretary for a centre-back and centre-forward.

The Citizens’ defender and Lyon’s Memphis Depay were the Dutch coach’s priority targets in the summer and the Blaugrana couldn’t sign the duo due to ‘economic and market reasons’.

It’s claimed the former Everton manager is ‘more than likely to order’ his club to sign Pep Guardiola’s man and Depay when the window reopens in January.

Sport asks whether Koeman will be able to make this decision after Josep Maria Bartomeu announced his decision to step down as Barca’s president earlier this week.

According to the newspaper, Koeman could be in for a disappointment if the election to decide Bartomeu’s successor is not held before the end of this year.

In other words, without a new president, Barca may not enter into the market to make new signings in January.

Barcelona agreed a deal with Atlético Madrid Arda Turan from in the summer of 2015 and the transfer was complicated. The special commission had to sanction the deal because the Catalan club were then in midst of the presidential election. 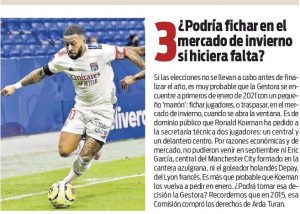 It remains to be seen whether there will be another commission to overlook the club’s January transfer business, if Barca fail to elect a new president before the start of the next window.

García’s current deal City is until 2021 and he can join the Spanish giants on a free transfer next summer if he fails to sign for them in January.