On Wednesday, we covered a report from Italy claiming Hellas Verona had made a few enquiries about Xavier Mbuyamba.

The Chelsea youngster is unused by Thomas Tuchel to date, and while he has played with the reserves, there’s a belief competition at a higher level will do him the world of good.

Verona in Italy are taking an interest in the defender, as was first reported by L’Arena, and Gazzetta dello Sport back this up on Thursday.

They report the Serie A side ‘have probed’ the young Chelsea man, with a ‘six month loan being worked on to allow the Dutchman to shine in Serie A’. 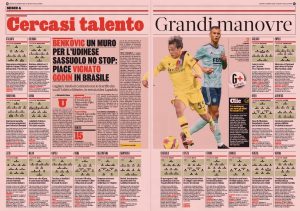 In fact, the manager, Igor Tudor, ‘would have given the green light’ to his club to bring in the 20-year-old, who was signed from Barcelona’s U19s back in August 2020.

Whether this takes place remains to be seen, but it would be a great opportunity for Mbuyamba, who has yet to make a professional appearance for the Blues.