Sport Bild claims Bayern Munich have received positive signals from the Leroy Sane’s management that the possibility of a transfer still exists, even though the winger has not made any direct declaration to the Bundesliga winners.

Uli Hoeneß and Hasan Salihamidzic want to sit down with Karl-Heinz Rummenigge to discuss the Manchester City star, once the latter returns from the US tour=.

Bayern want to give the 23-year-old a deadline, to declare whether or not he would be interested in joining them. The response has been delayed due to his participation in City’s tour.

Salihamidzic has already stepped up negotiations with the player’s management and provided them with the sporting plan for him, which is also backed in advance by Bayern manager Niko Kovac.

Once Sane returns to England after two friendly matches in Japan, his advisers will present Bayern’s plan to their client.

Speaking to Sport Bild, Kovac said: “Our leaders show him a clear plan that has been agreed upon. We are very focused and target-oriented. Leroy knows what to expect here.”

It’s claimed Bayern asked City about Sane in June, and the player was informed about the request. 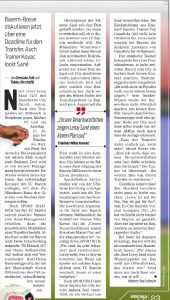 Kovac is aware Bayern’s leaders are working hard and will do everything possible to bring the attacker to the Allianz Arena.

However, it is still not clear if Sane is open to joining Bayern as Sport Bild end their report by stating: ‘Now only Sane needs to know what he wants…’