Tuttosport reported on Tuesday that Ole Gunnar Solskjaer ‘wants’ Paulo Dybala and Manchester United are ‘serious’ about the Juventus forward.

The same information is once again relayed in today’s edition of Tuttosport and, according to sources from Argentina, Dybala is seriously considering leaving the Old Lady.

Until recently, the Argentina international didn’t think of a summer move. However, his stance has changed and he would not oppose a sale now, provided he has the chance to join an ambitious club. In Turin, they are waiting for the 25-year-old to confirm it himself.

Gonzalo Higuain, Mario Mandzukic, Paulo Dybala and Moise Kean have uncertain futures and two of the four will be sold this summer. Though it makes sense to sell the former two (due to their age), the latter two are more likely heading towards the exit door.

Tuttosport claims Manchester United are still courting Dybala and Tottenham have also made inquiries for him. In addition to this, PSG are monitoring his situation.

Juve have so far not received any concrete offers and want €80-100m (bonuses included) minimum.

Solskjaer ‘wants’ his side to sign the South American, so that he can play alongside Marcus Rashford and United leaders are ‘trying to please’ their manager, according to the claims.

Contacts between the two clubs have been frequent and United have already offered a contract to the former Palermo star’s entourage to compensate for the lack of Champions League football next season. 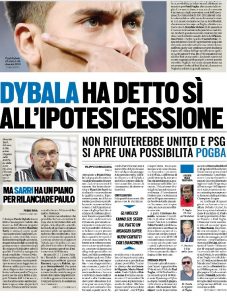 If the Dybala joins United, Juve will convert the player’s sacrifice into an opportunity to go for Paul Pogba.

Though Real Madrid are believed to be ahead of Juventus for the United midfielder, Dybala’s sale would increase the Serie A winner’s chances of signing Pogba.

This could all be Tuttosport trying any way to make the Frenchman’s arrival likelier.