Even before the summer transfer window was officialy open, Juventus’ Joao Cancelo was being linked with a move to Manchester City.

If Portugal international had left the Turin club, the Old Lady had identified Matteo Darmian as his replacement.

Gazzetta dello Sport on Saturday claim the Manchester United fullback had reached an agreement with the Serie A winners, but his return to Italy was dependent on Cancelo’s exit.

Pep Guardiola’s side want to close the former Valencia man’s signing before the window closes and as a part of the deal, they have offered Danilo to Juve.

The proposal of a swap deal involving Cancelo and the ex-Real Madrid fullback could have an impact on Darmain. 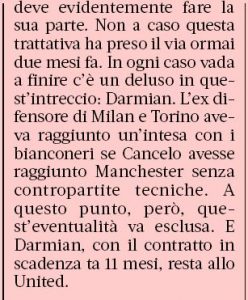 Gazzetta explains at this point, the possibility of Darmian signing for Juventus should be ‘excluded’. They further go on to explain the versatile defender will remain at Old Trafford.

Darmian’s situation could change if another club comes calling to acquire his services this month.