Spanish newspaper report Barcelona are ‘ready to sell’ Andre Gomes and that Manchester United have ‘serious’ interest in the player.

Gomes hasn’t been able to impose himself at Barcelona, and a transfer has seemed the inevitable outcome for some time. When given chances, the Portuguese international has usually failed to take them, and there’s now a growing acceptance he’s not up to Barcelona’s level.

That presents the obvious question of whether he’s up to Manchester United’s level, or at least the level Jose Mourinho aspires the club to be at.

Happiest in central midfield, and able to play as part of a midfield three, there could be an argument Gomes would provide the conditions to play with Nemanja Matic and Paul Pogba in a 433, but there’s an equally good argument against that.

AS explain Gomes has been able to impress in Barcelona training, but when it comes to matches he just can’t replicate it. The claims echo similar from Sport a week ago. 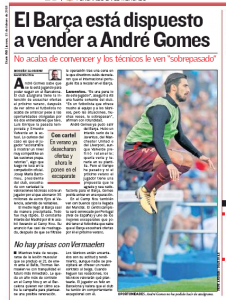 The Catalan newspaper said the 24 year old is ‘a player lacking confidence’, ‘full of doubts on the pitch’, ‘limits himself to doing the easiest thing: pass backwards to a teammate’, ‘shows his inner nervousness’, and has a ‘lack of absolute confidence in his talent’.

Is the Manchester United cauldron the best place for such an individual? Perhaps not, although he’s represented by Gestifute, so Jorge Mendes may try to persuade Mourinho otherwise.