In September 2016 the French media were probably at the peak of their frustration with Paul Pogba.

A 0-0 draw away to Belarus and an average performance from the Manchester United player was enough to see some built up frustration let out. There was certainly a hangover from Euro 2016, and given Pogba didn’t perform to the best of his capabilities during that tournament, the criticism was always ready to appear at the right moment.

L’Equipe said ‘Pogba was not bad, just average’, and the reaction was more disappointment than anger. With a good defence behind him and N’Golo Kante at the side of him, more was expected.

The match report came from Damien Degorre who had spoken to Pogba directly during the Manchester United transfer saga, and also published a claim the then Juve player had told his France teammates about a desire to return to Old Trafford, which came before the transfer looked nailed on.

Continuing to express his disappointment, the French journalist wrote: ‘Yesterday he celebrated his fortieth match since joining les Bleus in March 2013, and in three years it is still difficult to pick a match which stuck in the mind and justified all the hopes and acclaim that has accompanied the player since his debut.’

At the start of the next international break, Didier Deschamps fired a warning: “He can play higher up or further back. I’m not going to build the team around Paul. He’s an important element, but he needs to adapt too. When we have a three, he can be a bit more free going forward.

“But he’s also capable of playing both roles in midfield. At Juve, he played a bit more on the left, but it’s not like he exclusively stuck to that left hand side.”

A few days later France beat Bulgaria 4-1 with Pogba playing alongside Matuidi in a 4231 formation. L’Equipe still picked the midfielder out for criticism, giving him 4/10 and the lowest French ranking.

Deschamps again spoke out, explaining he wanted more from Pogba, and another chance would come against the Netherlands.

Pogba took it, with a great performance and the only goal of the game. He was still playing in a 4231 formation alongside Matuidi, but this time had done enough to please his manager and critics.

With the player being his country’s hero and taking L’Equipe’s front page, Deschamps was asked what he’d said to make the difference: “Honestly, I did not say anything to him. Just four words before reaching the locker room: I trust in you.”

Pogba’s time with France continues to be hit and miss, and the frustration is still there. There’ll be hope the Netherlands match version of the player can be present at the World Cup, rather than the version which leaves French football fans going ‘bof’ (that’s their version of ‘meh’, never say you don’t learn something from Sport Witness).

Deschamps isn’t the only manager to have problems getting the most out of Pogba, Jose Mourinho is currently experiencing the same.

Wednesday evening saw two stories come out which looked like they were possibly leaked from the Mourinho and Pogba camps.

One, from Duncan Castles, saw Pogba displayed as someone with a bruised ego, feeling pushed aside since the arrival of Alexis Sanchez and believing the team should be set up more to help him.

The other, from L’Equipe, was potentially more explosive. 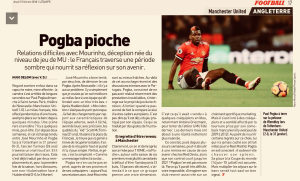 ‘Difficult relations with Mourinho’ have been born from the level of Manchester United’s play, said the newspaper.

‘The Frenchman is going through a dark period which feeds his reflection on his future.’

‘Pogba doesn’t hide it in private, with his family and teammates: these days, his relationship with Jose Mourinho is at best cool.’

‘He is disappointed with the game played by his team. Which results in gestures of frustration.’

Then there was a sub-headline reading ‘He regrets returning to Manchester’, and it’s fair that’s the headline which has been taken, because L’Equipe say it, but the rest doesn’t fully back it up.

Pogba had expected a bigger improvement: ‘This is what he had “sold” to some teammates in blue, including Antoine Griezmann, to try to attract him to MU last summer. The last few months have resulted in a much more nuanced reality.’

‘Can this realisation, one that has been around for a weeks, end up with him reassessing his future with the Red Devils with whom he has a contract until 2021? Pogba isn’t there yet because it seems very difficult, nearly impossible, to see his club make a u-turn so quickly on a choice that has as much to do with football as it does marketing. However, he’s spoken to some teammates and seems affected by how his Mancunian comeback has turned out. To the point of entertaining a few regrets on this decision, him who has never hidden his initial attraction for Real Madrid.’

Many Manchester United fans have already dismissed it all as nonsense, which may have an element of putting fingers in ears and humming loudly. Mino Raiola could yet come out and label it all ‘blah, blah, blah’, but there’s clearly an issue given it was apparent before the claims.

Pogba hasn’t been playing at his best and Mourinho, just like Deschamps, doesn’t appear ready to completely build the team around him.

That may not be out of spite. Mourinho likes his battles, he thrives on them and always has, he is the eternal scorpion and will sting without enough consideration of the implications. But he’s also pragmatic, and just like Louis van Gaal he’s having to protect Manchester United’s weak defence.

There was a time when some held Chris Smalling and Daley Blind aloft as being among the best defenders around (there was, honestly, we all lived through it), but it was largely because Van Gaal played in a way to protect his defence, which ultimately made his team boring.

Wanting, and potentially needing, two deeper midfielders, so playing 4231, albeit with Pogba given more freedom, is what Mourinho feels he needs to do right now. And Pogba can play in that system, he’s shown it for France and Manchester United.

He’s done it repeatedly this season, but not often against the biggest opponents. Poor form can’t always be dismissed as down to a manager not creating the perfect conditions to allow one player to flourish, that wasn’t accepted in France so it may be a bit rich for their media to apply a different logic at club level.

Of course Mourinho shouldn’t have signed Pogba if he didn’t know what to do with him, but circumstances can change with injuries and form. With the midfielder turning 25 years of age next month, he should be rounded enough to perform in his given position and not restricted to one place in a narrow selection of formations.

He can do it, he isn’t at the moment.

Now both men need to work together to sort the situation out. Privately.