When Alex Sandro announced that he, one day, would like to play in the Premier League, there was a bit of a buzz going around many fanbases.

After all, the Juventus defender is one of the more highly-rated left-backs in the world, despite his tendency to go in and out of form, and clubs like Manchester United and Chelsea were linked.

This all came amid an ongoing negotiations between the Italian side and Sandro regarding a new contract, which he now appears to be ready to sign.

According to Corriere dello Sport, a new deal keeping him in Turin until 2023 could be signed, and the main club likely to miss out are the Red Devils. 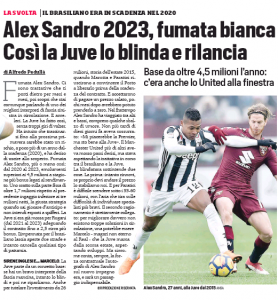 The Italian newspaper state that, ‘more than others, Manchester United had taken bold steps’ to try and sign the Brazilian, but were waiting for the negotiations between player and club to end first.

We’re guessing they wanted to see the defender refuse to commit to Juventus, therefore lowering his cost (his current deal runs out in 2020), before making a move.