Over the past few days, we’ve seen the emergence of stories linking Dries Mertens to Arsenal.

After all, on paper, it makes sense, as the Belgian forward has enjoyed his best years in a team that plays quick football with the ball on the floor, scoring 43 league goals over the past couple of seasons.

However, the 30-year-old, whose contract with Napoli is meant to keep him at the club until 2020, has a release clause in his contract of €28m, and that’s caught the eye of Manchester United.

According to Il Mattino, it’s ‘quasi-certain’ the Belgium international will leave Napoli in the summer after staying an extra year (his previous contract was due to run out in June 2017), and the likeliest destination will be China. 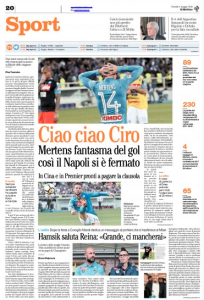 But, and there’s always a but, the Naples-based newspaper also reveal the forward has been the subject of a José Mourinho ‘enquiry’, which makes very little sense since the Portuguese manager has already made it clear he wouldn’t be bolstering his attack in the summer.

Then again, if the opportunity to sign a prolific goalscorer like Mertens presents itself, you never know what could happen, as the acquisition of Sanchez has proven Manchester United are ready to go against the grain of logic when it comes to signing players.

With the likes of Anthony Martial and Marcus Rashford already playing down the left, there was little need for the Chile star, but look at what happened.

Honestly, we don’t see this happening one bit, but it’s very difficult to predict the moves Ed Woodward will make in the coming months, even if there is a strong need to prioritise the acquisition of full-backs and midfielders.