When Ole Gunnar Solskjaer became Manchester United’s full-time manager, one thing was made very clear, which was there would be an increased use of youth players going forward.

The Norwegian has kept to his word, perhaps more so than he initially wanted to due to injuries, and players such as Angel Gomes, Mason Greenwood and Brandon Williams have all enjoyed spells in the first-team this season.

Another player used has been Tahith Chong, but the intermittency of his appearances haven’t allowed him to get any sort of form going.

That, combined with the fact his contract at Old Trafford is set to run out in June next year has set a few alarm bells ringing around Europe, notably in Turin.

There have been a few reports that Juventus are keeping a close eye on Chong’s situation, and Corriere dello Sport had an article on the matter on Sunday.

They claim the young Dutchman and his entourage feel he hasn’t been used ‘enough’ by Solskjaer this season, and have ‘unsurprisingly started looking around in search of a new adventure’ and a project that would ‘help him become a great’. 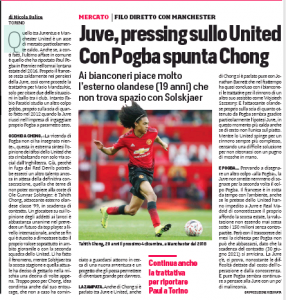 Furthermore, the young forward ‘seems to particularly like’ the idea of a move to the Serie A champions, even if it isn’t ‘the only one on the table’.

In the meantime, Manchester United are trying to tie down the 20-year-old to a ‘constantly more complex renewal’ in order to avoid a repeat of the Paul Pogba situation all those years ago.