Trawling back through the Sport Witness archives, you can see that Benoit Badiashile is a player Manchester United have been following for a very long time.

The first article we covered about the Red Devils being interested in the now 21-year-old dates back to 2017, when it was reported they had made an offer for the then 16-year-old.

The latest comes from Nice-Matin in France, who look at what the future holds for the centre-back, who is left-footed and therefore more of a rarity on the transfer market.

They say he is ‘still followed by Atlético Madrid, Chelsea, Manchester United and Newcastle’, while Sevilla, expected to lose Jules Koundé following the sale of Diego Carlos, have joined the fray.

However, to date, ‘no agreement has been found with any of these suitors’, as AS Monaco have made it clear they are going to ask for a lot of money, having settled their accounts comfortably with the €100m sale of Aurélien Tchouameni. 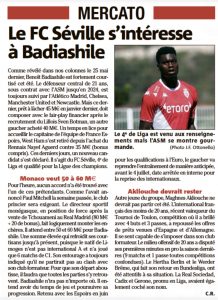 That’s why ‘they are waiting for €50-60m’ to be put on the table for their defender, which is described as a sum ‘that has cooled down’ interested parties for now, since he isn’t a full France international and has only played six games in the Champions League.

As for the player, ‘his entourage have always said they won’t clash with his club’, meaning that ‘for an exit to happen, there will be a need for all parties’ to be happy with the deal.

Whether that is something Erik ten Hag would give him plenty of at Manchester United, that’s entirely up to the Dutch manager to decide on if he ever enters talks with the player.