Real Madrid have identified Manchester United star Cristiano Ronaldo as one of their options, after failing to convince Paris Saint-Germain forward Kylian Mbappé to join them this summer.

Mbappé ended the speculation around his future by penning a new deal with the Ligue 1 side at the weekend. With that track ‘vanished’, there are three targets who are ‘affordable from the economic part’.

That’s according to AS, who name the Manchester United attacker, Bayern Munich star Robert Lewandowski and Barcelona’s Ousmane Dembélé as the options for Los Blancos.

Regarding the former Real Madrid star, the report states he is ‘available again’ after last summer’s rejection.

A return to the Spanish capital was a possibility for him last summer, but they ‘slammed on the brakes’ since they were then chasing Mbappé and didn’t want to send him ‘wrong signals’. Ronaldo ended up returning to Manchester United.

The 37-year-old’s contract at Old Trafford expires in 2023 and his ‘signing would not imply a monumental operation’ for the La Liga winners. He and Ancelotti share an ‘excellent personal relationship’.

Ronaldo left Madrid in 2018 but it’s said he has refused to give up his mansion in La Finca and has also not wanted to ‘move his fleet of luxury cars from there either’.

After Real Madrid turned down a chance to sign the player last summer, it is ‘possible to reactivate the threat of reunion’. However, AS points out a ‘new attempt has not occurred’. In other words, they have not made an attempt to sign Ronaldo so far. 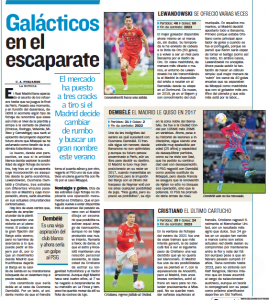 The market has put Ronaldo, the Bayern striker [contract expires in 2023] and Dembélé [contract with Barca until June 30th] ‘within reach’ of Ancelotti’s side.

Real Madrid have put this matter on hold until they play the Champions League final against Liverpool on May 28th.

They will make a decision whether or not to bring in reinforcements, depending on the outcome in Paris.

‘Happy in Manchester’ – Insistence player not looking to leave Man...