Usually we bring all the Bruno Fernandes updates from Portuguese newspapers together in one morning article, but Monday’s edition of Record was a little late today.

A Bola and O Jogo seemed relatively confident. The word ‘imminent’ was used, although it didn’t feel like Manchester United truly have this transfer in their grasp yet.

Record may have the reason for that.

Despite it being claimed widely elsewhere (A Bola, O Jogo, RTP) that Manchester United have upped their offer to €55m guaranteed plus a further €15m in bonuses, Record say this hasn’t yet been done officially.

As we’ve explained before, a big deal of that is made in Portugal and it’s thought an offer isn’t really a firm offer until it’s all in writing.

According to the Portuguese newspaper, a €5m of the €15m in bonuses is easy to achieve, whilst the rest remains relatively difficult.

Unless there’s a ‘decisive’ movement in the coming hours, and that’s not something 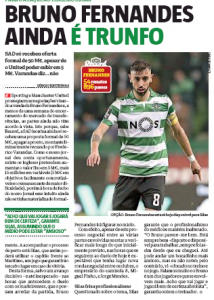 Record expects to happen, then Bruno will play this evening against Maritimo.

A ‘new negotiating round’ is then expected in the hours after the match, although it’s not made clear if they mean tonight or tomorrow.

The whole thing is ‘taking longer than planned’, and even though there’s the will a move happens ‘the parties still don’t have an agreement in sight’.