Since the rumours started back in November about a potential Faouzi Ghoulam exit from Napoli, there’s only really been two clubs from the Premier League seriously linked with a move: Chelsea and Manchester City.

Pep Guardiola’s side have comfortably been labelled as the one out of the pair most likely to land the Algeria international, but Il Mattino on Friday seem keen to change that.

According to the Naples based newspaper, José Mourinho could try and scupper a deal for Ghoulam, as Manchester United are named as one of the interested teams in the left-back.

With Luke Shaw clearly still out of favour at Old Trafford, and the Special One yet to settle on either Marcos Rojo, Daley Blind or Matteo Darmian for the role, a new player in that position could be a summer priority for the Red Devils. 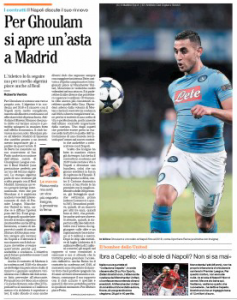 Il Mattino explain Manchester United have Ghoulam in mind for the role, but following yesterday’s claims from Le Buteur in Algeria the player would prefer a move to Real Madrid, also interested, they could have a tough time convincing him to choose England instead.

As his contract with Napoli runs out in June 2018, and rumour has it the defender has rejected his current club’s contract renewal offer, this summer is likely to be his last in Italy.

Of course, this could just be a case of the newspaper throwing United’s name into the mix to try and make the chase for their team’s left-back even more exciting, and we’ll be keeping an eye on this in the near future to see if it actually develops into something rather than just being a one off mention.