Manchester United and Roma are in many talks these days, mostly about Chris Smalling.

However, if Il Messaggero are to be believed, then there could be also be some for Nicolò Zaniolo in the near future.

At least, that’s what they hint at, as they claim the Old Trafford side are very interested in the Italian playmaker, sending a scout to supervise him and Sandro Tonali in Italy’s 9-1 drubbing of Armenia on Monday.

Zaniolo walked away with two goals and an assist, and it’s made clear that he was the main reason for the trip, as they have followed his progress since the start of 2019, ending up in their sights after his double against Porto in the Champions League. 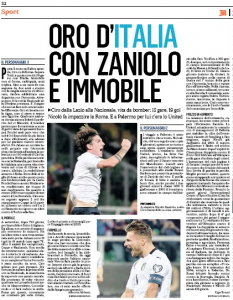 Il Messaggero believe it’s Manchester United’s intention to ‘rush things’ as they know that every game the youngster plays, the higher his price goes.

Since they are already in talks with Roma over Chris Smalling, it’s said they might as well ‘try right away’ to at least get some sort of option from the Serie A club while they have them there.

It’s not a bad idea, and considering Zaniolo can comfortably play down the right hand side, an area where Manchester United have struggled to find anyone adequate for quite some time, why not try and sign him while his price is still within range?