It’s hard to keep up who’s been linked with Lazio’s Stefan De Vrij over the past few months, with a number of foreign and Premier League clubs all taking an interest in his situation, but one thing is certain, Manchester United haven’t been one of them.

That doesn’t mean to say they’ve never been interested, as there was a strong build-up of José Mourinho interest in the Dutch centre-back prior to the summer transfer window, only for nothing to happen and Victor Lindelöf to be bought instead.

Well, with Eric Bailly now out for a lengthy period, the aforementioned Swede yet to 100% convince and Marcos Rojo, Phil Jones and Chris Smalling not always performing at the required level, it seems the Portuguese manager has returned for his alleged former target.

According to Gazzetta dello Sport, the Red Devils are one of three clubs that aren’t Inter who have recently made ‘serious enquiries’ regarding De Vrij’s situation. 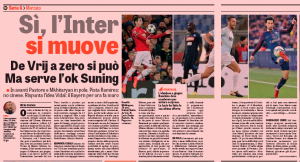 The Lazio star has yet to put pen to paper on a new contract, and with his current deal expiring next month, the opportunity for a cheap deal in the winter could be on the cards.

We say ‘cheap’, but considering his important to Simone Inzaghi’s plans, there’s little chance of him of the Serie A side feeling extra generous and give clubs a good price.

There’s also the possibility of José Mourinho only wanting him for next season, and Manchester United giving him a very generous contract to secure his signing on a free in the summer.

While centre-back might not be the desperate area of need at Old Trafford, perhaps such a bargain presenting itself will be too good to pass up.

Inter are very much the favourites here, according to Gazzetta, but Man United’s return could change things if there’s any truth to it.