If you’ve been following the Manchester United transfer rumours on our website over the past couple of weeks, you’ll recall a rather big story from Italy involving Federico Chiesa earlier this month.

It originated from La Nazione, who revealed the Premier League club had made an offer for the Fiorentina player that was ‘close, very close’ to what the Serie A wanted.

The figure they put forward was somewhere between €50-60m in cash, and it was suggested that if United upped things to €60m, then something could be done.

Well, that hasn’t happened yet, but La Nazione do double down on their claims this Friday and appear to have narrowed down their information.

They explain that while Inter and Juventus have come forward, their cash offers have all been around €30m, with the two clubs adding players in the mix to try and bring the price down.

The Florence side looked at the offers and said ‘no, thank you’, which leads La Nazione to speculate whether the path to England ‘risks becoming the most likely to be followed’. 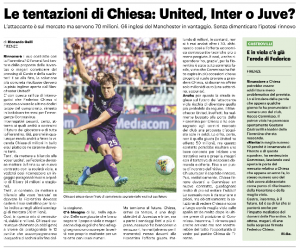 They state that Manchester United have ‘really knocked on Fiorentina’s door’ for Chiesa and ‘delivered an offer in cash to the club’s transfer men’.

As things stand, the offer, said to be of €50m, ‘isn’t the right one’, but it could ‘result in a concrete base to start real and true negotiations’ for the 22-year-old.

All this depends on whether or not Chiesa renews, but the confidence of that happening isn’t really there at the moment.

First, however, there is a need to finish the season, with 12 games left to play in Serie A.

Once that’s done, then it’ll be time for the club to focus on Chiesa’s future in greater detail.