L’Equipe now state a ‘departure’ could be on the cards for the midfielder as United, Chelsea, Real Madrid and Paris Saint-Germain have set their sights on him.

The Ligue 1 side were keen on extending the 18-year-old’s contract, but the two parties haven’t found an agreement so far.

Unless there’s a sudden twist, L’Equipe state the player is unlikely to extend and ‘this opens the door for a departure’ in the summer.

Rennes were reportedly hoping  to cash in €100m from the France international’s sale, but they may have to settle for €40m, ‘depending on the competition’. As of now, they haven’t received any offers for the player.

Manchester United get a mention and L’Equipe suggest Ole Gunnar Solskjaer’s side are ‘said to be ready to go on the offensive, without the Camavinga case being linked to a possible departure of Paul Pogba’.

In other words, United’s pursuit of the teenager wouldn’t depend 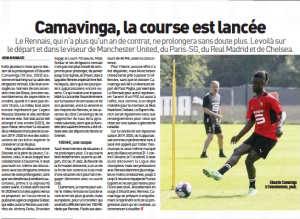 For Camavinga, PSG are ‘also on the lookout, as, to a lesser extent’, are Real Madrid and Chelsea.

With Camavaing set to leave Rennes [without an extension], it remains to be seen where he will end up in this window.