Manchester United and Juventus are ready to pay €180m for the Benfica duo João Félix and Ruben Dias, according to the Portuguese press today.

Newspaper Record is the one who claims that the Red Devils and the Old Lady are both prepared to activate the release clause of the attacker (€120m) and the central defender (€60m).

In case you are wondering ‘who is signing who’, which is the same question we’ve asked when we saw the story, Record doesn’t bring an answer.

They simply claim both clubs are ready to sign both players, and bring no details on how this situation would develop or which advantages each side would have.

The newspaper also says both clubs would like to have a discount in these negotiations, but know that the Benfica president Luis Felipe Vieira is unlikely to accept less than the release clause, so they’re ready to pay whatever is needed. 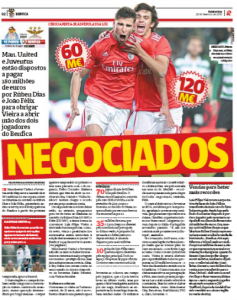 João Félix has been heavily linked to Manchester United in the past couple of weeks, and the same goes for Ruben Dias and Juventus, although the Old Lady are said to be wanting the 19-year-old as well.

On Wednesday, it was reported in Italy that Jorge Mendes had meetings with both clubs to listen about their interest for João Félix.

Now Record confirms that it’s Jorge Mendes who’s been handling these operations. He’s the agent of Ruben Dias and has an agreement to negotiate João Félix as well.