On December 17th, we carried a report from La Voix du Nord explaining Manchester United are one of the clubs who have held talks with Lille for Boubakary Soumaré.

According to L’Equipe, Renato Sanches’ emergence at Lille has convinced the Ligue 1 club to allow Soumaré to leave in the winter market. Their initial idea was to cash in from his sale in the next summer window.

It’s claimed the Red Devils, Napoli, Valencia and Real Madrid are all looking at the midfielder.

However, the 20-year-old’s ‘preferred destination’ is a move to the Premier League, where an option to join Manchester United ‘pleases’ him. 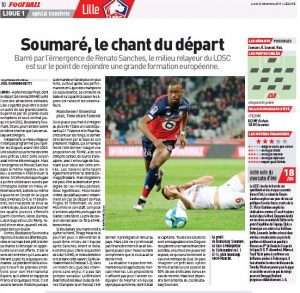 The newspaper adds Ole Gunnar Solskjaer’s side appeals to Soumaré, and more so if Paul Pogba leaves United.

Lille want €50-60m for the Frenchman and this is including bonuses.

L’Equipe’s report mainly focuses on Lille and Soumaré’s stance on a transfer and there isn’t anything to indicate that Manchester United will submit an offer for the player.