Home Europe Man United player ‘will do everything’ to get January exit – ‘Tired...
SHARE

On Thursday, we covered a claim from the Italian media that Anthony Martial was a target for Juventus in the January transfer window.

That was because Manchester United had reportedly ‘broken up’ with the French forward, which all stemmed from his agent coming out and saying he needed to find a new club to play more regularly.

He isn’t entirely wrong, since Martial hasn’t exactly been a regular starter under either Ole Gunnar Solskjaer or Ralf Rangnick, and so a January exit, whether it be permanent or temporary, could be best for all parties.

Juventus were immediately thrown into the mix as they are currently struggling for goals and Max Allegri would like some reinforcements in that department.

Since Dusan Vlahovic is currently too expensive for the Serie A side, Martial represents a potentially cheaper option to consider in the next transfer window. 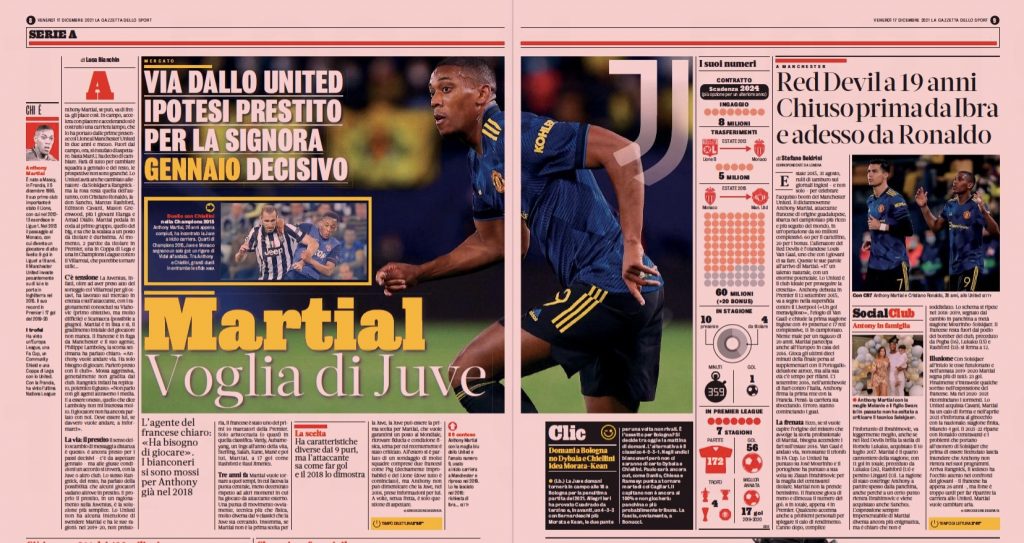 Gazzetta dello Sport continue their reports on the situation on Friday, making it clear that the France international is ‘tired of waiting’ for first-team opportunities at Old Trafford and ‘has decided to change’.

In fact, he ‘will do everything’ to change teams in January, as his prospects in the north of England currently aren’t great.

Juventus have made their interest known, and ‘the player’s initial satisfaction at the idea is not lacking’.

Right now, ‘it’s still early for decisive steps’, meaning ‘we have to wait until January’, but ‘under the right conditions, an agreement will be found, with Juve or another club’.

A loan is ‘the simplest solution’ because Manchester United ‘have no intention of selling off Martial’, recalling that he was one of the top 10 scorers in the Premier League not too long ago.

This is definitely growing in Italy via Gazzetta, and with Martial’s agent pushing for an exit, it’s only going to get stronger.