Sunday’s edition of Tuttosport reports Tahith Chong is on the verge of agreeing a deal with Inter Milan, echoing similar claims which came from Italy in midweek.

The 20 year old’s contract at Old Trafford expires at the end of June, and as far as the Italian sport media have it he has no intention of signing a renewal with United.

Tuttosport report that as long as Ching accepts a loan move away from Inter, he’ll sign a contract with the Serie A club until 2025. The player’s salary will be €2m per year including bonuses.

Even thought that figure is after tax, it’s much less than it was originally claimed Chong’s agent was asking for, and there’s no mention of a signing-on bonus.

Tuttosport say Chong would then be loaned to a ‘friendly’ club, such as Verona, Parma or Sassuolo.

A loan is essential as it’s explained he doesn’t even fit the game system of Inter manager Antonio Conte. 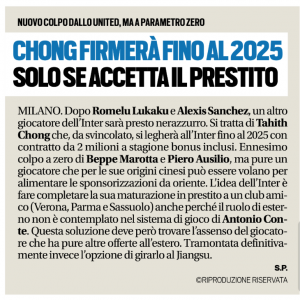 The Manchester United youngster would partly be signed for sponsorship reasons, with his part Chinese descent being a big commercial boost.

Not fitting the manager’s system, being signed at least partly for commercial reasons… it’s a risky decision.