Having already secured the hugely impressive signing of Dusan Tadic from Southampton this summer, Ajax have again set their eyes on Daley Blind.

De Telegraaf go big with the story in their Monday edition, giving it the front page of their sport section and a big feature inside. This feels more concrete than previous Blind to Ajax rumours.

The Manchester United utility player has ‘indicated’ he’d like to return to the Amsterdam club, and those wishes haven’t fallen on deaf ears.

Ajax are keen on making Blind another big signing, but are wary over what the Premier League club may ask for.

It’ll be hoped that with Blind only having a season left on his Manchester United contract that the club won’t demand too much in terms of transfer fee. Blind himself would also have to be realistic about wages, something he’ll be aware of already. 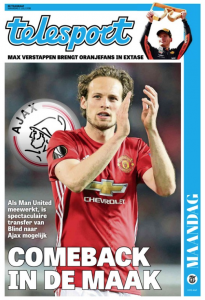 The 28 year old has been a useful squad option for Manchester United but despite some unreasonable hype around him at times, he’s never proven himself to be more than that.

De Telegraaf report he’s been out of Jose Mourinho’s plans for over a year now and an exit seems fitting.

That’s why it’s thought getting Blind from Old Trafford this simmer will be easier than the deal Ajax managed to build with Southampton for Tadic.