While some of Manchester United’s loans were successful this year, that of Andreas Pereira to Lazio was not.

The Brazil international was sent to Lazio to get some game time under Simone Inzaghi, and while the deal seemed to be a good one at first, it turned out to be anything but.

Pereira failed to impress the now Inter manager enough to earn a starting role, and his versatility, normally a great attribute, was his downfall, as he was more of a jack of all trades and master of none.

He has since returned to England now that the season has ended, but that doesn’t mean his future is at Manchester United.

In fact, Corriere dello Sport claim he could make a surprise move to Lazio on loan once again, now that Maurizio Sarri appears to be set to take over in the club’s capital. 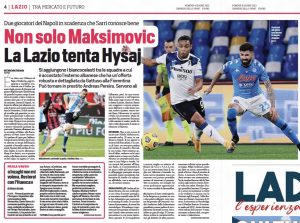 They explain that while the club aren’t going to buy him outright using the pre-agreed fee from the last deal, they could ‘try to renew the loan’.

With Inzaghi now gone and a new system to be in place at Lazio if Sarri signs, this could be his real time to shine.

Something for Manchester United to think about, where Pereira is currently contract until 2023.