Home Europe Man United man ‘will have wondered several times why he was chosen’...
SHARE

Outside of Ole Gunnar Solskjaer’s plans at Manchester United, Andreas Pereira was handed the opportunity to get some first-team football at Lazio this season.

The midfielder travelled to Italy on a loan contract, with the Serie A side adding an option to make the move permanent if they so wished.

That, however, seems rather unlikely as things stand, since the 25-year-old has been anything but a regular starter under Simone Inzaghi, totalling 523 minutes of football spread over 20 appearances.

They’ve all mostly come from the bench, and it seems that the Italian manger is struggling to fit the Brazil international into his team.

Corriere dello Sport look at what Lazio will do in the coming months regarding their first-team, and they touch upon the Manchester United loanee’s situation. 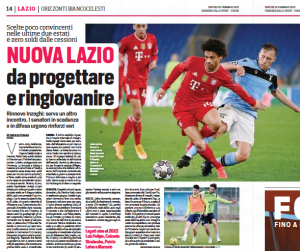 They write the playmaker ‘will have wondered several times why he was chosen’ if the club’s ‘tactical design doesn’t foresee his use’.

Following their 4-1 defeat to Bayern Munich in the Champions League, their road in the competition has basically come to an end, and all the focus will be now on the league, where they currently sit sixth after 23 games, one point behind AS Roma in fourth.

There’s still plenty of time for the Manchester United man to make his mark, but unless Inzaghi changes his tactics, it’s going to be an uphill battle.