Manchester United weren’t exactly torn to shreds by Barcelona on Tuesday evening, but they were left bloodied and bruised.

The gap in quality between the two sets of players was stark, and supporters of the Premier League club are hoping for big investment this summer.

One of the names continually linked as a potential big signing is Jadon Sancho. The 19 year old has 11 goals and 14 assists so far this season for Borussia Dortmund and he plays on the right… an area Ole Gunnar Solskjaer’s side could do with some help.

This week’s edition of SportBild touches on the player’s situation, and it doesn’t sound like great news for the Red Devils.

Manchester United interest is noted, but it’s stated that Manchester City, where Sancho was from 2015 to 2017, wouldn’t be too thrilled with their former player moving to Old Trafford. 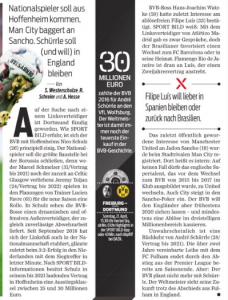 The word at Pep Guardiola’s club is, according to the claims, that Sancho can’t be allowed to join their Manchester rivals.

It’s not made clear exactly what Manchester City plan to do about it, but they’re now in the ‘Sancho Poker’.

As far as Borussia Dortmund are concerned, they don’t want to sell until 2020 and would then demand a transfer fee which is at least €100m.