Needing a centre-back to bolster their defence, Manchester United appear to have set their mind on signing Kalidou Koulibaly from Napoli.

At least, that’s what the European media seem to have agreed on, and with that many outlets talking about it, fans are starting to believe this could become an actual thing.

However, Gazzetta dello Sport take some time out of their busy schedule on Thursday to try and put an end to all this, explaining the stories about Manchester United and Koulibaly are ‘indiscretions’ and that’s it.

The same applies to Real Madrid and Paris Saint-Germain, also said to be keen, yet the stance in Naples is simple: he isn’t going anywhere.

With no need to sell and Aurelio de Laurentiis’ desire to start some kind of dynasty with Carlo Ancelotti at the helm, keeping hold of their stars will be a priority this summer. 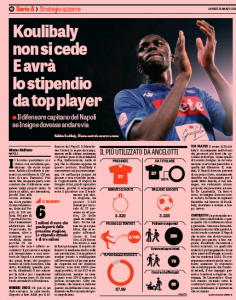 Even if they did sell one of their important players, like Lorenzo Insigne, for example, Gazzetta simply point out that Koulibaly would then be made captain, as that’s who they seemingly want to build their squad around.

On top of that, the plan is for the Senegalese defender to sit down with Napoli at the end of the season and discuss a new contract that would double his wage.

That means Manchester United’s interest has served its purpose: getting said player a pay rise.

90% of the time, it happens everytime.