The Barcelona player, however, turned down an opportunity to join the Red Devils.

His contract at the Camp Nou runs down in 2020 and Sport reported this month the English side are ‘perfectly informed’ about the 23-year-old’s situation at the club.

Bild are reporting the France international and Sancho will be the objectives for Manchester United later in the year.

These claims are relayed in today’s edition of Sport and it’s explained the player has expressed his interest to continue at the club. He’s in ‘no rush’ to sign an extension and is waiting for the club to appoint a new president.

Barcelona will hold their presidential election in March and the club’s new management must decide whether or not to offer an extension to the wideman.

Should they decide to do so, it needs to be seen if the new proposal will see an increase in wages and then, if an agreement can be reached.

If the negotiations breakdown, Dembélé could either decide to leave as a free agent in 2022 or evaluate the options he will have on the table for the summer.

Ole Gunnar Solskjaer’s side get a mention and it’s claimed they are ‘going to push hard’ for his signing in the summer. 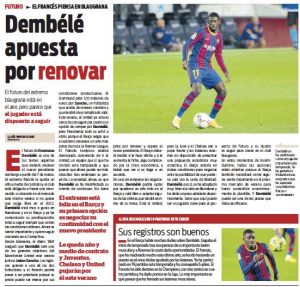 The Spanish side will not be in a position of strength to demand a hefty fee for the player, if he doesn’t sign a new deal.

Sport end their report by stating: ‘In these moments of uncertainty, all options are open because Barca will also need to close an important sale in the next summer market to make the squad economically sustainable. And Dembélé may be one of the pieces that must be sacrificed.’