Friday’s edition of Sport claims Manchester United are looking at Jean-Clair Todibo, who has struggled for minutes since joining Barcelona in January.

It’s claimed the centre-back has several offers on the table and Ole Gunnar Solskjaer’s side have emerged in recent hours. There’s ‘conviction’ at the Camp Nou they could cash in €20m from the Frenchman’s sale.

The Red Devils have ‘entered very strong’ for the 19-year-old, and a few days ago English emissaries travelled to Barcelona to hold talks with the La Liga winners on behalf of the Premier League side.

Todibo is said to be really liked by the United technicians and they are willing to offer close to €20m.

Barca are open to the idea of selling their player, but they want to include a buyback option. This doesn’t please United and if they want to sign Todibo, it’ll be without the inclusion of a repurchase option. 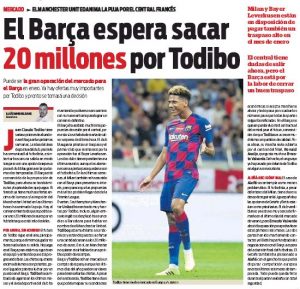 Solskjaer has the services of Harry Maguire, Victor Lindelöf, Axel Tuanzebe, Marcos Rojo, Phil Jones and Eric Bailly as the recognised centre-backs in the squad.

This feels like the Catalan media trying to talk up more interest in a Barcelona player than there actually is.