However, the transfer never materialised because negotiations between Spurs and Barcelona collapsed. Mauricio Pochettino was then in charge at Tottenham.

The Argentine was sacked by the north London club in November and he continues to be linked with Manchester United, even though Ole Gunnar Solskjaer has helped the Red Devils to go on an unbeaten run in all competitions.

Manchester United were reportedly looking at Coutinho last summer and Thursday’s edition of Catalan newspaper Sport claims they ‘could return’ for him after this season, if Pochettino is appointed as Solskjaer’s successor at Old Trafford.

However, Coutinho doesn’t relish joining United because of his past association with their league rivals, Liverpool. Therefore, the path to joining them is ‘absolutely closed’ and the 20-time English champions are the ‘only team’ to be ruled out by the player. 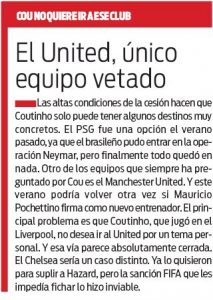 Coutinho’s currently on loan at Bayern Munich and they have decided against making his transfer permanent in the summer.

Prior to joining the Bavarian club, Chelsea wanted the 27-year-old to become Eden Hazard’s successor. However, they couldn’t sign the Brazilian because of their transfer ban.

Another report from Sport indicates the Blues are still ‘interested’ in Coutinho.