Over the weekend, both Mundo Deportivo and Sport explained the priority of Barcelona’s new sports management will be to extend the contracts of Ousmane Dembélé, Óscar Mingueza and Ilaix Moriba.

Focusing on Dembélé, the reports explain how the winger has turned things around at the Camp Nou, months after coming close to joining Manchester United last summer.

The 23-year-old, who struggled with injuries in the past, has featured 35 times in all competitions this season, scoring nine goals and registering four assists in the process.

His current deal will expire in 2022 and Monday’s edition of Sport once again reiterates Ronald Koeman’s side must prioritise extending the France international’s contract.

The newspaper also explains Manchester United plan to return for the World Cup winner. It’s claimed the Red Devils have ‘amplified their interest’ in the former Borussia Dortmund man after his performances improved this season, and have gone on the ‘attack’.

Having failed to sign him last summer, Ole Gunnar Solskjaer’s side have ‘continued contact’ with the player’s camp and have already communicated their plan.

There are two options. The first is to offer a transfer fee to Barca in the summer and the second is to wait until 2022, to acquire Dembélé’s services on a free transfer.

Koeman, for his part, views the Frenchman as an ‘important pillar’ of the team and his new project at the club. New Barca president Joan Laporta hopes to convince the attacker to sign an extension. 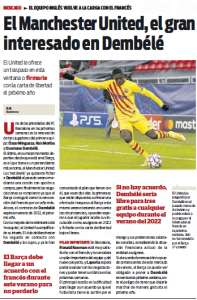 As per the claims, finding an agreement has become a ‘main stumbling block’ for the Spanish club.

Dembélé has the upper hand due to the duration left on his contract and he wants a raise in his salary. Sport states his demands are ‘high’, considering the current economic climate.

If the two parties don’t find an agreement over a new contract before the end of this season, the report explains Barcelona may be forced to make Dembélé available in the next market.