Home Europe Man United among clubs ‘at window’ and ‘in front row’ for defender...
SHARE

While he was never going to leave Napoli midway through the season, Kalidou Koulibaly did get linked with a number of clubs during the January transfer window.

The most common link was with Manchester United, which came as a surprise to absolutely no one, since Ole Gunnar Solskjaer’s club could always do with an extra defender in his squad.

What helps is the belief that Napoli have already rejected a hefty offer for the Senegalese from the Old Trafford club in the past, meaning Koulibaly and the Red Devils often come as part of the same breath for Italian journalists. 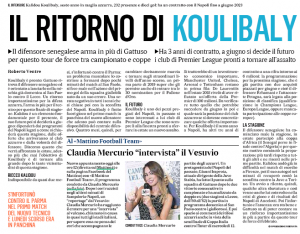 They explain the English sides are ‘at the window’ and ‘in the front row’ for Koulibaly, but a lot will depend on where the Napoli ends up come the end of the campaign.

The Italian newspaper state ‘the planning for next season will be tied to the league position’, as missing out on European cups could see them need some sales to make up for the lack of prize money.

Napoli are currently 10th in Serie A with 30 points from their first 22 games, nine points off the Champions League spot currently occupied by Atalanta on goal difference.