It’s been a few months since the Portuguese media started reporting Manchester City’s interest in Sporting wonderkid Nuno Mendes, and we finally get to see some interesting updates on this situation today.

A report from A Bola says the Lions offered the Premier League side a deal with a ‘more attractive’ price where the player would only complete the move in the summer of 2022.

It’s said Manchester City turned down this possibility, but the negotiations stand with ‘all scenarios on the table’.

The newspaper insists that Pep Guardiola’s side reserved a budget for the signing, which is of €60m up front plus €10m in bonuses.

Sporting’s plan is to make Mendes their biggest sale ever, and those figures would be enough for it. 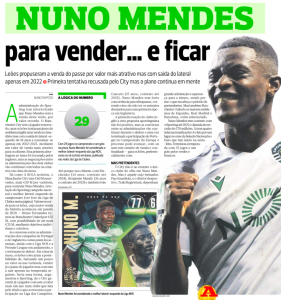 It’s said the talks between the clubs started ‘weeks ago’, when the Portuguese and the Premier League were still on.

That’s when Sporting offered Man City a discount in exchange for keeping the player for one more year.

Despite rejecting that chance, it’s said the English side will continue to negotiate after the end of the Euros, and something could still happen this summer, regardless of the date set for the move.

A Bola points out that Barcelona, Manchester United and Real Madrid all have Nuno Mendes ‘referenced’ as well.