After a 2-1 defeat at the hands of Lyon in the Champions League, Manchester City bounced back and registered a comfortable 5-0 over Cardiff City on Saturday.

Riyad Mahrez, the English champions’ only summer signing, started the match on the bench and when the scoreline was 3-0 after an hour’s mark, Pep Guardiola replaced Sergio Aguero with the Algerian international in the 61st minute.

It took just six minutes for the former Leicester City star to score his first goal for the Etihad outfit and he got his second goal against the Bluebirds in the final minutes of the match.

Despite playing less than 30 minutes at the Cardiff City Stadium, the 27-year-old has made it to Gazzetta dello Sport’s European Team of the Week. He has been given a rating of eight, and is the second highest rated player after Ibai Gómez of Alaves, who received a rating of 8.5. 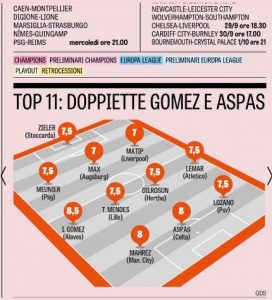 Mahrez, along with Liverpool’s Joel Matip, are the only two Premier League players to make it to the Italian newspaper’s European Team of the Week.

That’s one or two less than most weeks.