On Thursday, Mundo Deportivo stated that Manchester City’s Bernardo Silva has a weakness for Barcelona.

It was also explained the player will assess his options, if the La Liga side were to make an offer for him.

The Blaugrana’s interest in the midfielder is again discussed in today’s Mundo Deportivo.

Silva is a ‘priority’ target for Xavi Hernández’s side if Frenkie de Jong leaves the club this summer. The coach only wants to sanction the Dutchman’s sale if a quality replacement arrives and this is where the Citizens star fits in.

Jorge Mendes, the Portugal international’s agent, met Barca leaders earlier this week, and Silva’s name was put on the table during discussions between the two parties. His deal at the Etihad runs down in 2025.

The former AS Monaco man wanted to leave the Premier League winners for Barca last summer, but the deal didn’t take shape due to the Spanish giants’ economic situation.

Xavi’s side are aware the 27-year-old wants to change clubs. Silva has Pep Guardiola’s word, to facilitate his transfer, provided City receive a good offer in return. The deal is complicated because the English champions will demand a high sum for their player. 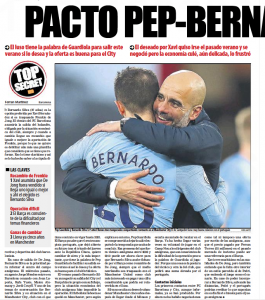 The ‘pact’ between Guardiola and Silva can now be ‘key’ for the latter to end up at the Camp Nou, as long as De Jong is sold.

The money raised from the ex-Ajax star’s sale can help Barca sign the City star.

In other words, there are lot of factors that need to go in Barcelona’s favour for them to have a chance to sign Silva this summer.